The editorial board of The Buffalo News recently called for the rehabilitation of the Scajaquada Creek. In an explicit response to our demand that the NY-198 expressway be removed, the board demurred on whether "that feat of traffic engineering is feasible or necessary." We feel that "necessary" is a community discussion, having to do with what our priorities are as a society and as a city. Feasible, however, can be more easily quantified. The News editorial was occasioned by GBNRTC's publication of the Mobility Experiential Guide as part of their planning project for "Region Central," an area defined as a roughly two-mile-wide corridor around the 198 and the NY-33 as far as Grider street. This two mile strip includes six neighborhoods and a significant part of the city’s population. Region Central is the latest attempt to do something about the problem that is the Scajaquada Expressway, and the Mobility Experiential Guide represents the result of the investigation by transportation system consultants Stantec and their team. The Guide was laid out fully at a public meeting on 9 November. All page number references are to the guide. It is our contention that for the inhabitants of Region Central – people who live, work, or play within the area – the expressway causes more problems than it solves.

Part of the original rationale of introducing expressways into our urban fabric was to lift the mass of commuter traffic out of neighborhoods onto a dedicated roadway, speeding the commute and easing local congestion. If one goes around tearing down expressways, the logic goes, then all of that traffic just swamps local roads. Stantec’s research presents data that suggests this rationale may not be true for this expressway. The Scajaquada's busiest hours are neither the morning nor the evening commute, but an afternoon surge peaking at 3pm. Stantec's study relied in part on aggregated smartphone data (if your GPS has ever asked you, e.g., to review a gas station in Buffalo, then you have already participated in a mobility study - surprise!). The aggregated data includes the classification of trips into various categories, including trips between work and home, i.e. commuting. The data show that during commuting hours, most drivers on the expressway are not commuting (19). If you look at driving trips starting in Region Central, which necessarily includes all of the morning commutes of people who live in Region Central and all of the afternoon commutes of people who work there, they are mostly under five miles long (10). Stantec found that for journeys of that length, the expressway typically makes up only a fraction of the journey, suggesting that people ride the expressway for only one or two stops (21). 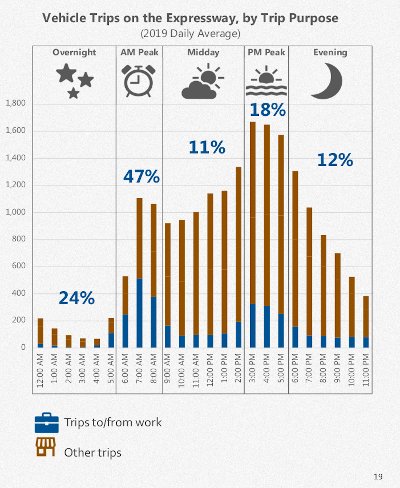 The Expressway is a Barrier

The expressway was offered to commuters as a relative benefit to East-West acceleration, but few patrons of the expressway actually make full use of it. Noting the low volume of end-to-end traffic (8% of Westbound and 19% of Eastbound traffic), Stantec concluded that the expressway "primarily functions as a long on/off ramp for the 33 and I-190" (22, 24). It extends that function to every north-south crossing of the Scajaquada Creek. Every historic street grid crossing of Scajaquada Creek has been combined with a highway on-off ramp (35). Rather than relieving congestion around crossings, the Expressway adds to it. This experience causes people in Region Central to treat the Expressway as a barrier more often than as a path. This is illustrated best by walking data, which show that where people are walking farther than the boundaries of their own neighborhood (excluding neighborhoods where 90% or more of walking journeys stay within the same neighborhood), they are anywhere from two to four times as likely to choose destinations on their own side of the expressway (42).

Now is the time for Buffalo to plan green infrastructure!

This brief overview only touches on what is in the Mobility Experiential Guide, most of which suggests that the Expressway is more of a hindrance than a help to commuters and inhabitants of Region Central, and that it would not be missed. At this time, the GBNRTC consultant team is developing a set of future scenarios for Region Central. We urge everyone in Region Central to follow this process closely, as it is an opportunity to make lasting taxpayer investments in the right kind of infrastructure. GBNRTC has published the Guide alongside other resources here. You can watch the recording or read the summary of November 9's public meeting, where the whole Guide is presented, along with an explanation of how the research was conducted. Most importantly, please discuss this project with someone you know who lives, works, or plays in Region Central: Do you experience the Scajaquada Expressway as a shortcut or as an obstacle?