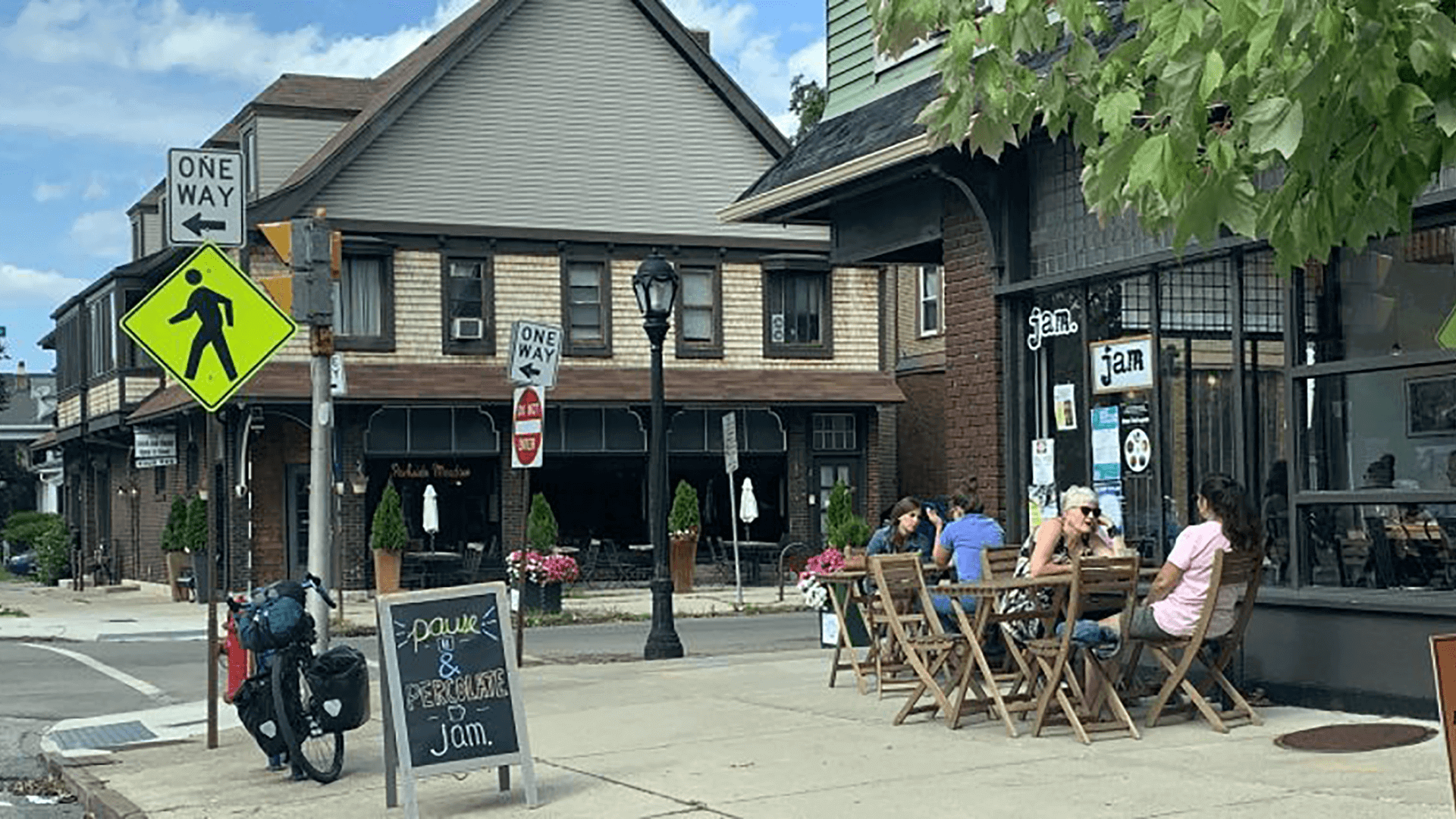 Various communities around Western New York emerged and thrived around various natural resources, one in particular being the Scajaquada Creek. Since those days’ infrastructure like the Scajaquada Expressway, a mid-20th century plan has divided and impacted those very communities in many ways. These days, supporters of the expressway’s removal are on a mission to reclaim and rebalance the damage done, as sadly much of its non-redeeming. However, with growing interest in these changes there is an opportunity at hand to cease any further permanent damage and revitalize areas that positively impact businesses, museums, colleges, conservation efforts, various other institutions, and more.

The modifications made to Route 198 in 2015 have particularly resulted in logistical issues which have been swept under the rug for too long, a new multi-model parkway can be the solution needed. This is just one specific opportunity of many, which could be beneficial for a greater majority of those involved.

Buffalo was built upon a series of natural and man-made resources that for much of the city’s history have shaped a cohesive urban ecosystem. Many city neighborhoods were established around their proximity to such natural resources as parks and waterways. Scajaquada Creek is a prime example of how multiple communities were given birth from the same source, in this case along an inward waterway weaving a path to the Niagara River.

The biggest threat to Scajaquada’s ecosystem has been the New York Route 198 (Scajaquada Expressway), one of several mid-20th Century plans across Buffalo that has been acknowledged as an urban planning mistake by supporters and detractors alike. Ironic to its long-touted intent of making traveling around the city more seamless, it infamously erased significant acreage of Delaware Park, essentially dividing the Meadow portion from the Lake portion. It isolated neighborhoods from the street grid proper, separating Burbank-Agassiz-Meadow from Parkside, and Trinidad from Hamlin Park. Perhaps more ironically, the elusive search for progress from mid-20th Century postwar wisdom has led to a scenario that has stagnated regional transportation policy in the early 20th Century.

The expressway’s negative influence has assured decades of population decline and regional disinvestment in central city neighborhoods, manifesting into an equally dissonant narrative where the misguided convenience of Amherst, Cheektowaga, and Tonawanda determines the fate of Parkside, Hamlin Park: and Black Rock-Riverside. Today, using Scajaquada Creek as the base point, a new breadth of opportunities and incentives are available for Parkside, Hamlin Park, and Black-Rock-Riverside to advocate for their own interests, and like many great American cities, build into a cohesive whole.

A neighborhood built on a former driving range, Hamlin Park served as the East Side complement to North Buffalo’s Parkside, with many homes sharing the same architectural styles of the day (Foursquare, Bungalow, Colonial Anne Revival, and Homestead). The neighborhood’s value was generated from the presence of Humboldt Parkway, providing a lovely centerpiece for what would become one of Buffalo’s most stable communities. Many African American residents who worked as doctors, educators, and local athletes resided in Hamlin Park during the mid-20th Century.

Future prospects include residents enjoying a weekend’s stroll along a newly restored Humboldt Parkway between Martin Luther King Park and Delaware Park. A new Humboldt will serve as a catalyst for at least 30 years of economic replenishment for Hamlin Park and the Jefferson and Fillmore Avenue Business Districts.

During the 1960’s, African American residents were subject to displacement from freeway construction and other urban renewal projects around the East Side. This callous trend was brought in large part by blockbusting tactics relished by realtors to devalue city neighborhoods for the specific purpose of attracting white residents to the suburbs. At the height of the civil rights movement, a congregation in Parkside established the neighborhood association to buck the White flight trend of the time, by encouraging White residents to stay and invest in the city, while dually welcoming displaced African American residents as new neighbors.

Parkside has been praised for its community stewardship of maintaining active block clubs, hosting annual neighborhood activities, and curating well-preserved homes. It continues its mission of upholding Buffalo’s own title as the “City of Good Neighbors”.

Several cultural and educational institutions are seated on opposite ends of Delaware Park. Canisius College is nestled in Hamlin Park near the path of Humboldt Parkway, while Medaille College sits at Agassiz Circle a mere walk from Delaware Park’s Meadow, Parkside, and Burbank-Agassiz-Meadow (BAM) neighborhoods. SUNY Buffalo State College is found on Elmwood Avenue, where Iroquois Drive goes along the southern edge of the creek traveling west past Delaware Park. In Delaware Park, the Albright-Knox Art Gallery oversees Hoyt Lake, while the Buffalo History Museum oversees Mirror Lake and the Japanese Gardens. Both structures are among the only surviving buildings from the 1901 Pan-American Exposition. The Buffalo Zoo, one of the nation’s oldest zoos, is nestled between Parkside Avenue and Delaware Park’s Meadow. The objective of reconfiguring the Route 198 expressway into a multi-modal Scajaquada Parkway through Delaware Park would tie these institutions together along a well-defined path that blends into its natural environment.

Black Rock is the relic of a former rival town in Buffalo’s earliest years, which became well-known for its marine industry along the Niagara River. The imprint of Amherst Street came to be known as “Downtown Black Rock” due to its westward parallel path near the Scajaquada Creek. Riverside emerged as an outgrowth of the industrial activity of Black Rock, which developed from other cultural and economic movements around the city in the early 20th Century. Riverside came to host the final Buffalo Olmsted Park, founded in 1912. Riverside today serves as a companion neighborhood for Black Rock, sharing its identity from the marine industry established along the Niagara River. Both neighborhoods seek to improve residential access to Scajaquada Creek, as well as expand public knowledge of their collective contributions to the city’s legacy.

The 2015 modification of Route 198 from a 55 mph expressway into a 30 mph parkway has revealed a series of logistical challenges that have gone unaddressed for decades. With live evidence of how a multi-modal parkway can be made more compatible with its direct environment, it breathes new life into discussions on how to tie adjoining neighborhoods, parks, institutions, and businesses together into a more viable corridor.

Buffalo’s revival strategy in recent times has relied on an essentialist movement, where the rediscovery of natural resources are adopted as a repurpose initiative for modern residents and stakeholders. We have witnessed an amazing comeback from the city’s waterfront with the establishment of Canalside as an inner harbor entertainment district, and the outer harbor as a parks and outdoor recreation corridor along the coast of Lake Erie. The Scajaquada Corridor seeks to utilize the city’s inward waterways to nurture new homes, new businesses, new investments, and new friendships for bordering neighborhoods. 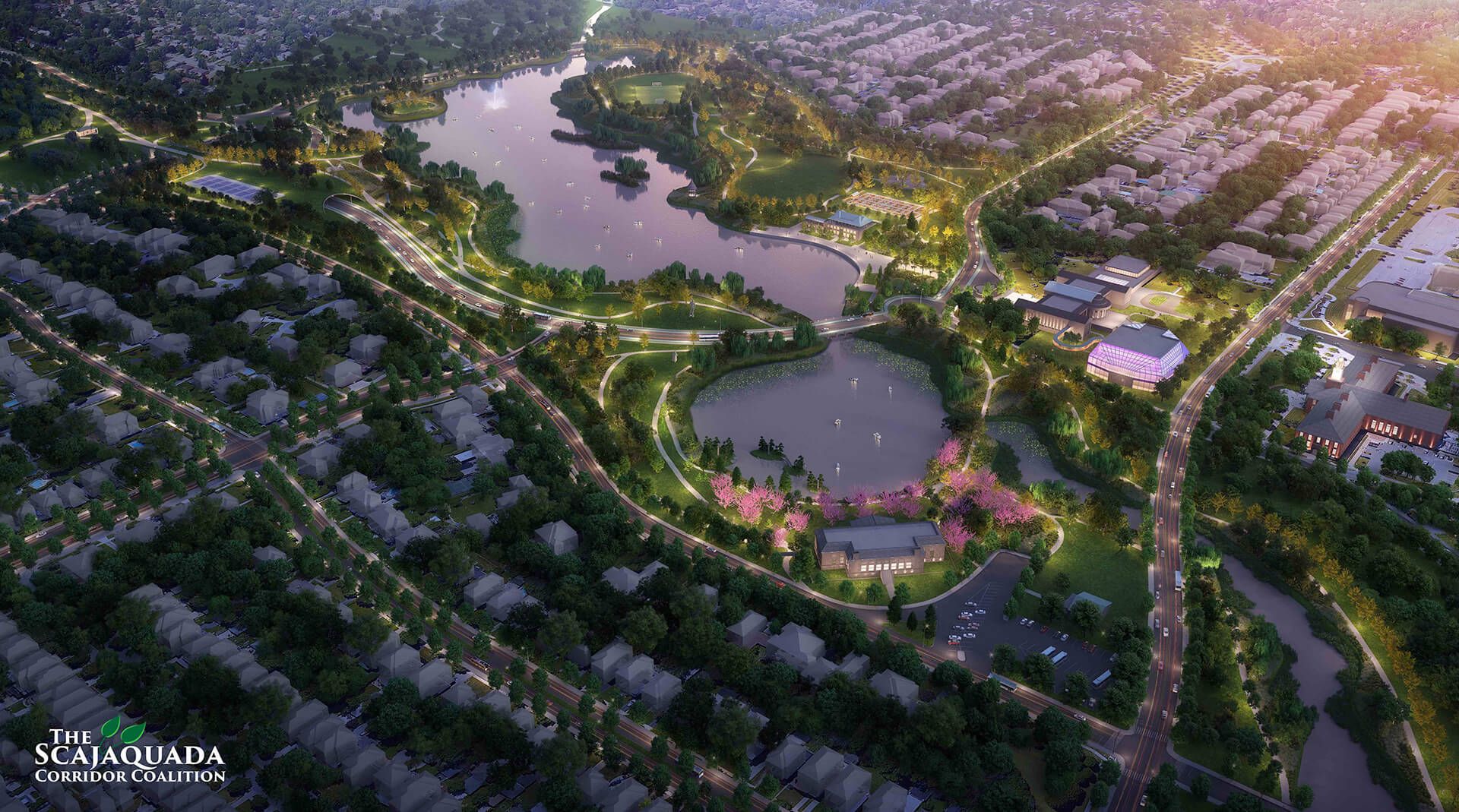